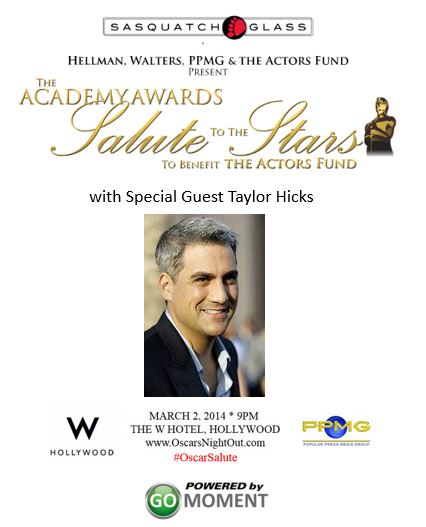 HOLLYWOOD -- Bob Hellman and Richard Walters are proud to announce that Taylor Hicks, American Idol winner and headliner at Paris Las Vegas, is set to perform at the 4th annual Hellman & Walters “Salute to the Stars” Oscar after party benefiting The Actors Fund.

Recognized by Variety Magazine as one of the top ten Oscar Events, “Salute to the Stars” will be taking over the rooftop at Hollywood’s luxury W Hotel on Sunday, March 2, 2014 from 9pm to 2am.

“Salute to the Stars” promises to also feature other surprise guests and live performers including the variety band TODDSPLANET.

Full of energy and charm, TODDSPLANET, lead by Todd Morse of The OffSpring and H2O, interacts with the audience, bringing surprise guests on stage to join them as they perform Rock ’n’ Roll hits from the 70s through today. Performing at the star-studded, red carpet event “Salute to the Stars”, one never knows who else may join them onstage.

For more on the 4th Annual Salute To The Stars and to purchase tickets, please visit www.OscarsNightOut.com.