In Memory of my Grandfather

Hi Taylor, Just a quick little note to honor my grandfather, Nicholas George Simon. He came to our country from Syria when he was only fourteen years old to work to send money to his family and to pursue the American Dream. He joined the army and served our country in the first World War, losing an arm in battle during his service at a very young age. He received quite a collection of medals and awards and loved to show them off and tell us all of his stories. My grandfather never let diversity… Continue

Veteran’s Day has been noted each year by our family with the American flag flying from our front porch. We’ve had our share of uncles, cousins, and spouses, serve to protect this country and defend our freedom. This year seems a bit different. Our 18 year old grandson has joined the Army. He left today for the long flight from Portland, Oregon to Ft. Jackson, South Carolina for Basic Training. He graduated from high school in June. He delivered newspapers and played computer games. He’s going… Continue

Hi All! I proudly served my country as an Army officer for 20 years. After retiring from the Army, I decided to continue to serve my country by working for the U.S. Army as a civilian employee, which…

Hi All! I proudly served my country as an Army officer for 20 years. After retiring from the Army, I decided to continue to serve my country by working for the U.S. Army as a civilian employee, which I do currently! I also have a son who just joined the Army this summer. He will turn Nineteen the month he deploys to Afghanistan next April.

I am so proud to be a member of this great family of the Armed Forces - and more importantly, I am very proud of our soldiers, sailors, airmen,… Continue

When I was about nine years old, we lived next door to a young man named Jim. The left side of Jim’s face and all the way down his neck was completely white. Part of his nose was missing and the ear on that side of his head was very small. Although he seemed nice, I thought he looked like some kind of monster and used to have nightmares about him.

One day his wife, Anne, was having coffee with my mother and I overheard her tell the story about her husband’s scars.

My Husband was a Green Beret

My husband is the oldest of six children -- 4 of whom are boys. He did all the things young men of his age and background did in his hometown of Kansas City, MO -- fished, hunted, played football, was an Eagle Scout, bought and torqued up his bright pink Pontiac Boniville.

In the '60's young men faced a mandatory draft and had to register with the Armed Forces at graduation or at 18 if they were not attending college. America hadn't entered the Viet Nam war at that time but all the… Continue

Kenneth was a paratrooper and had been home at Christmas 1950, on a furlough. All of the living Allen siblings were home for a holiday reunion except for one. There were 14 children in the Allen family, 12 boys and 2 girls. Two of the siblings had died in infancy.

Kenneth had volunteered for overseas duty and first shipped to Tokyo. Then on his 18th birthday he was in Seoul Korea. Two months later Kenneth was killed in action.

Of Kenneth's brothers (one of them is my… Continue

We have a little holiday treat for you! We will be giving away ten (10) tickets for Taylor's show in Madison, WI via Twitter to five random lucky winners.

Here's the deal - Starting Friday, November 13th, all you have to do to enter is retweet (RT) Taylor's message regarding the contest and include @taylorrhicks in your tweet.

For example, your tweet would be: "RT @taylorrhicks - Twitter ticket giveaway for the 12/11 High Noon show in Madison, WI - 4 details, go 2… Continue

Today is Veterans’ Day. Not to be confused with Memorial Day. Memorial Day honors those who died fighting for our country while Veterans’ Day honors all those who fought and survived those wars, returning to fight the unending rigors of everyday life. Certainly, all of these brave, fresh-faced young men who for… Continue

This is my Dad, Salvatore Paonessa, who was a veteran of World War Two!

Hello Folks, My name is Nancy Paonessa and I am from Niagara Falls New York and I would like to tell you about my Dad, Salvatore Paonessa Jr. My Dad passed away from complications of congestive heart failure on Good Friday in 2001 at the age of 77, he was a good man who retired from the Niagara County Sheriff''s department where he worked as a deputy for over 20 years. Because of him, both my brothers followed in his footsteps and are currently working in law enforcement. My one brother, Nick,… Continue

My Favorite Meet and Greet

One of my favorite videos is a tape made from old "reel film" circa 1945. It is of my father and me having a "tea party." It is the only tangible evidence I have of meeting my father for the first time. Having been conceived during the war and with my father on ships throughout the Pacific, we did not "meet” until I was almost 3 years old. Letters from home keep him informed about "his baby girl" and I have all the letters he sent and those he received in a suitcase. I read them sporadically,… Continue

Veterans of the streets...

The role of the National Guard has changed drastically since the civil rights struggles of the 60s. Then, they were the military presence at home. Now, they are deployed around the world.

My husband was in the first National Guard unit that was sent into the Detroit riots in the 60s. He was there again after the assassination of Dr. Martin Luther King. Even several miles away, I was under a nightly curfew. After a time, I was allowed to visit him. It was a… Continue

It was a chance encounter. I was grabbing a burger at Hardees, and the older gentleman (named James) at the table beside me, (like myself dining alone), began our conversation by asking the location of the nearest stores. He explained that he had come to town to visit the local Veterans' Hospital for some treatments, realized that the town had changed and needed to kill time before his appointment.

I had to think long and hard about what to say regarding my family's history of service in the U.S. Armed Forces. Most of them have served in peace time situations, a few have experienced the ugliness of war. I wanted to make sure as I'm writing this blog I was giving the men in my family the proper respect they most certainly deserve. So with that in mind, let me introduce you to them.

Four generations of men in my family have served in the military, starting with my grandfather in… Continue 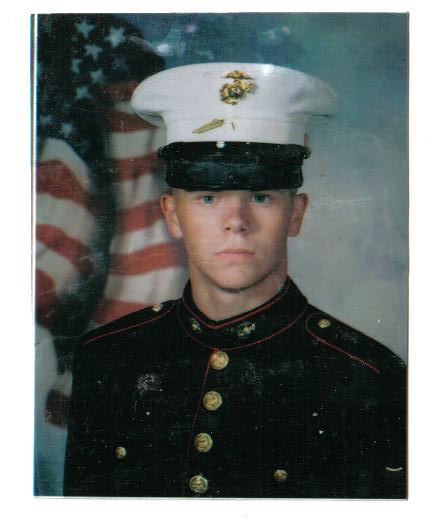 “AN OPEN LETTER TO MY MARINE”


The 12 hours of labor was nothing compared the pain I felt when you told me you would be joining the MARINES, but the worst of it was that the president had just declared war on Iraq. The 3 months you spent training at Paris Island only made my worst fears a reality. After a short stay at Camp Lejune, off you went to Iraq. Now, from that moment on every waking hour of my days were in front of any TV I… Continue

I started to write a long essay, but scrapped it instead for this picture of my Smilin' Jack: 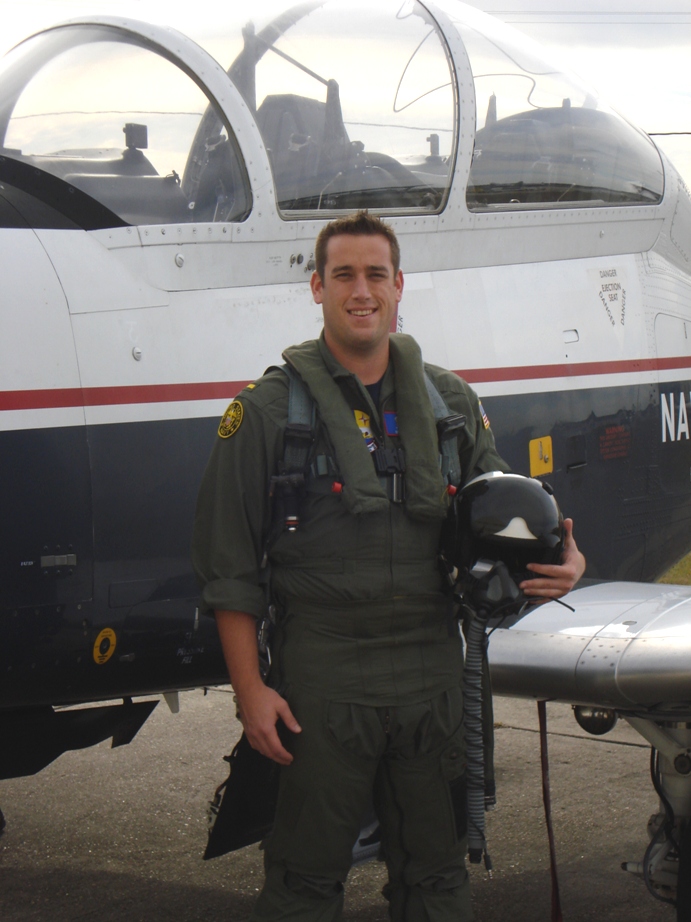 He comes from a long line of sailors yet surprised us when he entered OCS after earning his BA in music and then his MBA.
He lost his leg in a boating accident in March and is fighting his way back. His sunny attitude has never wavered. His desire to serve has never waned. I am confident that Ensign TJ Stecker II will earn his wings in… Continue

I have so many stories over the 20+years I have been involved with the USO and Navy League of the USA. One recent memory that holds a space I will never forget happened about 2 summers ago. I was on my way home after seeing Taylor & his band play in Maine and New Hampshire. I was at Manchester Airport waiting for my flight which they had just announced would be delayed for about an hour. Everyone grumbled as usual, until we saw the reason for the delay. From the cargo hold came a flagged… Continue

My brother, Bob is not a veteran of any famous war and was never a war hero, but he is a hero to me.
He was injured while performing training tank manevers in the army.
The tank rolled over on top of him, crushing him beneath, if not for the muddy field he would have died instantly.
Turn's out, that accident will probably eventually lead to his death anyway. There were radioactive packets on that tank and they exploded when the tank crashed.
Bob's body was saturated with… Continue

To honor our Vets (Part Two: A Vet's Voice)


Lieutenant Parks, who was our supply officer, ordered Corporal P. Gerald Barbato to pick up supplies for the 24th Signal Company, which were waiting for us at the beach. Knowing how precise the military was in the requisitioning and allocation of provisions, the lieutenant had simply referred to the necessary supplies as “our stuff.” Commandeering a three-quarter ton truck from the motor pool, Barbato drove, as he was told, to the appointed spot on the… Continue

Taylor, this is a blog to honor our Vets (God bless you)

Obviously, this is not my story. This is but one story of WWII written by my boss' dad, Thomas Petruzzelli, Sr. I did edit and enhance it, as my boss had asked me to do, for its first appearance on the writeonnewjersey.com site. But the story is Tom Sr.'s, who wrote it several months ago, as you'll see. I don't know how long a story this blog will allow so I will post it in two parts.


Part One: A Vet's Voice